I've recently done a little bit of beauty and skincare shopping, as I'm due to run out of a few skincare items and I also wanted to try some new products. 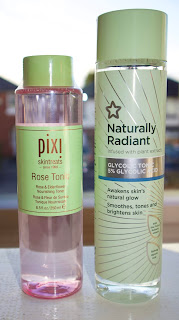 Pixi Rose Tonic
I'm currently using the Pixi Rose Tonic as part of my evening skincare routine, and I'm slowly working my way through my first full size bottle. I seem to be going through the bottle I'm using at a reasonable rate, so I thought it be a good idea to purchase a backup ready for when I run out.

Superdrug Naturally Radiant Glycolic Toner 5% Glycolic Acid
I decided to pick this up, as I wanted to try some more budget friendly glycolic acids to see how well they compare to ones from Alpha H and Pixi. I only paid around £5 for this large bottle from Superdrug, which is really good value for money (if it works), as I'm used to paying between £18-£30 for glycolic acid. 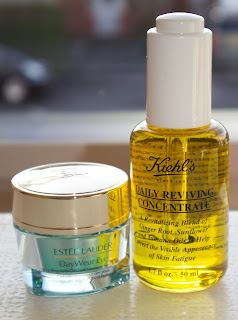 Estee Lauder Daywear Eye Cooling Antioxidant Moisture Gel Creme
I'm getting in need of new eye cream to use as part of my morning skincare routine, and I fancied trying something different. I've never used anything from the Estee Lauder Daywear skincare range before, so this is completely new to me. But I have heard some really nice things about this eye cream. 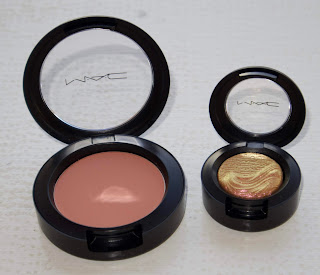 MAC Blusher in 'Melba'
I've been intrigued by blushers from MAC for a long time, but I have never actually purchased one. I decided on the shade 'Melba', as its a lovely neutral peach, which is something I don't have in my make up collection. I'm not too sure what MAC are doing with the blushes, but when I was buying this from the website it was discounted. So, I'm not too sure if they are reformulating the blushes or discontinuing certain shades.

MAC Extra Dimension Eyeshadow in 'Stylishly Merry' (Xmas Limited Edition)
I have been trying to get my hands on this eyeshadow from MAC for around three to four years, and never had any luck until now. Yes, this is a limited edition eyeshadow from MAC, but fear not if you want to get your hands on it as MAC have been bringing out the 'Stylishly Merry' every Christmas ever since they released it.

Email ThisBlogThis!Share to TwitterShare to FacebookShare to Pinterest
Labels: Skincare and Beauty Haul