I went to the Pixi Roadshow on the 28th October 2016, which was being held inside Marks and Spencer in Manchester. 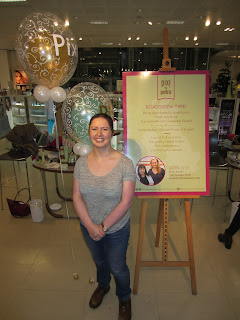 Skincare Consultation Steps
Pixi Cleansing Balm - messaged into the skin and then removed with a wet flannel
Pixi Glow Mud Cleanser - applied through my T-zone, left on for around 30 seconds
Pixi Glow Tonic - used to removed the Glow Mud Cleanser
Pixi Glow Mist - used to tone my face
Pixi H2O Skindrink & Glowtion DayDrew Moisturisers - one pump of the Pixi H2O Skindrink to a small drop of Glowtion DayDrew to hydrate my skin, as well as to give it a glow
Pixi Eye Elixir - applied all around my eye area

Next up was the mini makeover. Amy again talked me through every product she used, as well as her favourite products and what would work best for my skin.

Once I had my skincare consultation & mini makeover, it was then time for the first Q&A session with Caroline Hirons and Amanda Bell.
During the Q&A we found out stuff like how long have Caroline and Amanda have known each other, favourite Pixi products, one item that they would take on a desert island, benefits of double cleansing, backstage secrets and also seasonal make up and how to wear it.

After the Q&A had finished the audience could have a one to one with Caroline and Amanda.
So, I spoke to Caroline as I had been having some dryness issues around my nose area for around two weeks, and I had tried everything to get rid of it and nothing was working. It turns out that the problem was with my current skincare routine. I'm now slowly in the process of revamping my skincare routines.
Caroline was really lovely to talk too, and she has a wealth of skincare knowledge and skincare product knowledge at her disposal.

I have been the Pai Sea Aster & Wild Oak Instant Calm Redness Serum ever since I had finished the Estee Lauder Advanced Night Repair, & I must say that I'm really impressed with this serum because it does reduce redness overnight. 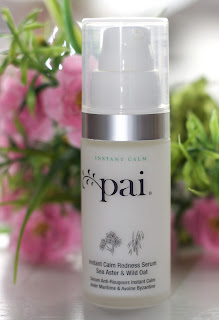 I use one pump of the Instant Calm Redness Serum after I have cleansed & toned my face, but before I go in with my Pai Rosehip Oil.

This is one serum which I would recommend if you have redness or Rosacea, because it does take the redness down a lot overnight. Its also a natural & cruelty free serum, so if your in need of a natural and cruelty free serum then it may be worth having a look into this.

Sorry this post has gone out a day later than usual, but I've had a minor scheduling problem which is why it didn't live yesterday as planned. 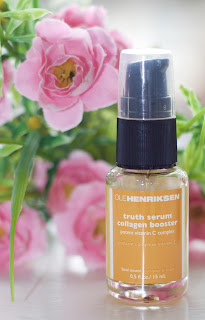 Since I have been using this my skin looks a lot brighter & more glowy than what it used to do. This is a lovely Vitamin C serum, which has a gorgeous orange scent too it. Also, a little bit goes a long way as I find that I only need to use one pump of this because it is a light, concetrated formula. It also makes my skin look more healthier, and even.

I have recently started to use the Liz Earle Cleanse & Polish Hot Cloth Cleanser as part of my morning skincare routine.

The Liz Earle Cleanse & Polish Hot Cloth Cleanser has a lovely, thick and creamy consistency. But, once it has been applied and massaged into the skin it actually feels very lightweight. Once the cleanser has been removed using a hot cloth; it leaves the skin feeling refreshed and clean. Also, it has a lovely mild eucalyptus scent.

This is a lovely, refreshing cleanser to use, especially as part of a morning cleansing routine. I love that it makes my skin feel refreshed once it has been removed, because I can actually feel it on my skin. It also leaves the skin feeling slightly moisturised, which is also lovely.

The Liz Earle Cleanse & Polish Hot Cloth Cleanser is available in two different sizes, as well as being part of a trail kit, and a skin care essentials set.

I recently been trying the Kiehl's Daily Reviving Concentrate as part of my morning skincare routine, and I thought that I would review it for you.

I've already started to notice a difference in my skintone since using this, as it feels brighter, a little more glory and more supple. It also feels more hydrated than usual.

Claims
- Strengthens skin's defences against daily aggressors to keep skin looking youthful & radiant all day
- Provides antioxidant protection with a powerful blend of naturally-derived oils, including Ginger Root, Sunflower, & Tamanu to help the skin feel fresh & look energised from the morning right the way through to the evening.

I've got a strange feeling that the Kiehl's Daily Reviving Concentrate is going to become a permanant part of my morning skincare routine. Purely because I have actually noticed a difference in the way my skin looks and feels.

The Kiehl's Daily Reviving Concentrate is available to buy in two sizes, which are 30ml and 50ml.