This is my first ever Avon haul on this blog. I used to buy Avon products a lot during my teenage years, but I haven't had an Avon representative for a good few years. But, I do have one now, but this is only a recent thing. So, they might be some more Avon hauls coming up in the near future.


250ml Shower Gels
This was one product from Avon that I used consistly during my teenage years, and if I recall correctly that a bottle of shower gel from Avon used to last me around six weeks.

Lagoon Shower Gel - This is a lovely fresh scent with just a hint of fruitiness. I don't think I've ever had this scent before, so I'm looking forward to using it.

Delightful Orchard Shower Gel - This is a gorgeous fruity shower gel, because it smells of raspberries, apples and cassis. This will be lovely to use during the Autumn months.

Pure Oasis Shower Gel - This smells exactly like green tea, which is unusual for a shower gel scent, but saying that it does have a hint of mint so that in itself will make it a little bit more refreshing to use in the shower.

Liquid Handwash
I've never actually tried the liquid handwashes from Avon before. So, I'm looking forward to seeing what the formula is like. 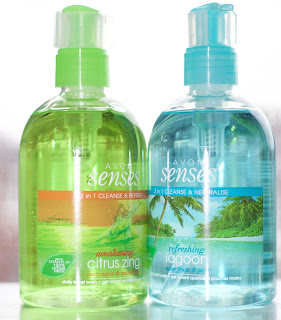 I got the scents Lagoon and Citrus Zing, as I thought they would be safe scents to try out. I got two bottles of the Lagoon hand wash, and just one bottle of the Citrus Zing. Lagoon is the same lovely fresh scent as the shower gel, and Citrus Zing is a very uplifting citrus fragrance and I wished that I picked up another bottle because it smells divine, especially if your big on your citrus scents like I am.

I purchased two of these, because I thought that they would be fantastic to put in my handbag as a little body refresher throughout the day. Also, the coconut and starfruit scent is delicious, and would be a great addition to wear during the spring and summer months.

Review: Soap & Glory 'Scrub Your Nose In It'

I thought I would review for you Soap & Glory's 'Scrub Your Nose In It', which is what I like to use when my nose get clogged or just a little bit dry. 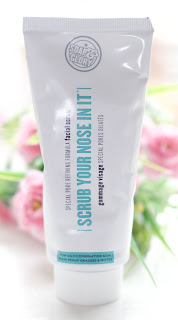 Soap & Glory's 'Scrub Your Nose In It' is green in colour, has a thick but slightly gritty texture, as well as a subtle minty fragrance, which is actually quite refreshing once the product has been removed.

I only use this when my nose needs to be unclogged, but I do notice a difference once I have used this. Also, I prefer using this method rather than the nose strips.

Email ThisBlogThis!Share to TwitterShare to FacebookShare to Pinterest
Labels: Soap & Glory Scrub Your Nose In It

I had the pleasure of seeing 'Breaking the Rules' at St George's Church in Kendal, because it formed part of the Lake District Summer Music International Festival.

'Breaking the Rules' is a performance to celebrate Gesualdo's 450th birthday. The performance consists of a two hour monologue and the Marian Consort performing Gesualdo's Tenebrae Responsies and Madrigril's. The Tenebrae Responsies are sacred pieces of music composed by Gesualdo and the Madrigril's are the pieces of music were Gesualdo started to explore the use of harmonics and chromatics, and that period in time it was just starting to come about.

'Breaking the Rules' is a one man concert drama that centres around the last of Carlo Gesualdo. Gesualdo is alone in his chapel on his family estate. But, Gesualdo has been living inside his castle for some time.
Two weeks previous he lost his only son and heir, and Gesualdo himself now stares death in the face, knowing that he faces purgatory for the multitude of sins which he has committed.
During his final day, Gesualdo is haunted by the memories of his first wife, Maria; who he murdered 23 years ago because she was having an affair with local nobleman, Fabrizio Carafe, the Duke of Andria. The only that will finally free him of these visions from the past is if he 'turns on' the music, which he himself has composed.
Also, in the chapel with Gesualdo are his consort of singers and they help to provide a soundtrack into Gesualdo's mind, as well as to act as a trigger to help Gesualdo remember his important life events.

Gerald is absolutely fantastic outstanding as Gesualdo, because he makes him likeable; even though he has a very dark and intense past. The monologue is performed with a lot of depth and contrast; and this is due to Gesualdo reflecting back on his past as well as highlighting some of his important life events.

'Breaking the Rules' is a fabulous production that provides the audience with a unique experience. If you want to watch a show that puts you in a dream like state (in a positice way) , and through a palette of colours, then this could be for you. 'Breaking the Rules' is a show that certainly takes you out of yourself and transports you to another place.
Posted by Blue Diamonds Forever at 09:00 No comments:

I thought I would review for you the Ole Henrikson Walnut Complexion Scrub, which I have been using for the past few months. 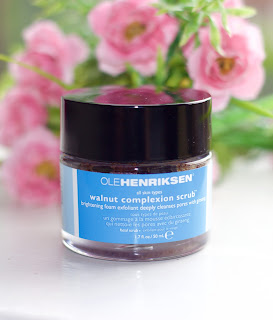 The Ole Henrikson Walnut Complexion Scrub is a lovely facial to use, especially if you prefer to use a more gritty, manual exfoliator.

The scrub itself is densely packed, but also glides smoothly across the face. Also, once a small amount has been added to the scrub, the scrub itself foams up just ever so slightly. This scrub is filled with loads of lovely ingredients such as Aloe Vera, Camomile, Korean Ginseng and Walnut Powder.
Aloe Vera - Moisturise, calm and to also heal the skin
Camomile - Calms, softens and soothes the skin
Korean Ginseng - Increases cellular energy and stimulate microcirculation
Walnut Powder - Mildly abrasive, and aids in cell renewal.

I use this scrub around once a week or once every two weeks, depending on what my skin needs. Its a really lovely scrub to use and this one does a really good job at getting rid of all the dead skin cells without being too harsh on the skin.

Due to it having a slight foam once water has been added, it has the added the benefit of cleansing the skin just enough that it makes the face feel soft and clean. I like to remove the scrub by using a hot flannel, and once it has been removed I can notice a difference in my skin in the way that it feels.

I thought I would review for the Clinical Clearing Gel from Clinique. I've only used it a handful of times, but everytime I have used it I have noticed a difference in my skin the following morning. 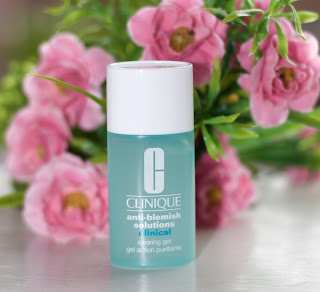 I decided to purchase this mainly because I needed a targeted blemish treatment for when I break out, and also because then I don't have to do my full acne facial routine.

The aim of the clinical clearing gel is to start clearing up blemishes straight away, once the gel has been applied to the spot. It also helps to prevent new blemishes from forming. It's also worth mentioning that this is a salicylic acid based spot treatment, so this may not be for everyone as not all acne responds to salicylic acid.