I thought I would try out calligraphy as a new hobby, but to do that I needed to invest in some calligraphy supplies.

Nib + Ink By Chiara Perano
This is a book all to do with modern calligraphy, which at the moment seems to be everywhere. Its starts off simple by getting you to do swirls and using different strokes, and then it starts slowly building you up to do your alphabet and joining letters together. It also gives you ideas for what you can use modern calligraphy for, and also the supplies which will help you along your journey into learning how to do modern calligraphy.
ISBN: 978-0-75355-728-0

For my calligraphy supplies I went to a website called Penman Direct (www.penmandirect.co.uk), which is a really easy to use and full of advice along the way. 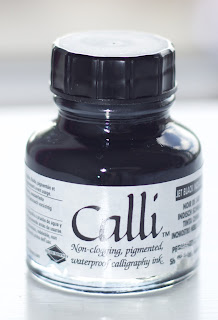 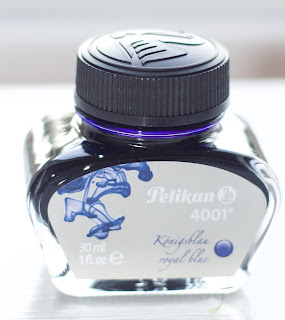 I decided to purchase both a blue and a black ink. For my calligraphy practice I'm using the black ink, and once I get more into doing calligraphy I will start to use the blue ink.
Black ink - Calli Ink in Jet Black India
Blue Ink - Peliken 4001 Ink in Royal Blue

Nibs
I purchased a selection of both nibs to do Italic/ Manuscript Calligraphy, and also nibs to do modern calligraphy.

The HIRO Leonadrt Rond calligraphy nibs are to do Italic/ Manuscript calligraphy. I decided to get one of each of the medium sizes which are in 4, 4.5, & 5. Each of the different sizes gives a different size thickness of strokes.

I purchased No. 2 plain painted wooden penholders, which hold the nibs. I got two in red, and two in blue. The red have a narrow nib holder, and the blue are slightly more broad in width.

I also purchased two Leonardt nib tins, just to protect the nibs when they are not in use. I have one tin for Italic/ Manuscript nibs, and a tin for modern calligraphy nibs.